Apparently I had me a smarty sounding moment back in 2004.  My boss was having a bad day and I guess he’d been muttering about what was the meaning of life, anyway.  Apparently I decided to answer that in a note I left him at the end of the day.  While sorting out some papers today I found that explanation and can’t resist sharing it:

The question “what is the meaning of life” is inherently misleading.  It asks for a quantifiable and descriptive quality to be applied to something that is by its very nature existing in realms that exist beyond the scope covered by our limited concepts of verbal communication.  It is a question of the same ilk as the mind/body problem or the nature of deity – these are questions that we want to answer the way we have been taught is proper through our western education, with formulae and charts and explanations that can be graded.

Yet life extends into dimensions we have barely started to be aware of and possibly beyond that thereby confounding any such attempt.  We have not yet been able to fully define life and so long as that definition eludes us, so will a definition of its meaning.

However, should we attempt to contemplate the mystery of life, we start to see spiralling and cycling possibilities of interconnectedness that hint at an inherent goodness (i.e. positiveness) that exists within the act of living.  At a most basic level, it can be said that there is meant to be life because life exists, on a par with saying that there is a universe because the universe exists.

But it is likely that the scope of the question being posed is of a far more narrow view:  what is the meaning of life for me living s a human being in this world at this time?  A ‘why do I exist’ style of question rather than why do any of us exist.  This type of question is often interpreted as the seeking of purpose, a questing on the part of our human spirit that needs to feel useful in order to be satisfied in its current situation.  Typically this type of seeker is not satisfied by the type of answer that is a fall out from the previous category of question:  that s/he is alive because the universe is a living, changing organism composed of a multitude of living creatures, being and experiencing, of which s/he is a part, that her/his life is simply (though necessarily) another strand in the wonderfully complex weaving of what is.

So what answer would satisfy?

Would only a quantifiable answer, one that can be described and labelled and fulfilled be acceptable?

Because when a purpose can be fulfilled, there is a meaning in that, something that only that person can do.  To say the purpose is to live, continue life through the creation of offspring and die, often seems hollow, lacking in a fullness of answer that was hoped for.  Truly, any interchangeable answer seems to be lacking for this seeker and that leads to the possible conclusion that s/he is in actuality looking for validation for their own existence, a comforting pat on the shoulder confirming that they are special, unique and that without their existence in the here and now the universe would not exist (either as a statement full stop, in the way it is ‘meant’ to exist, or simply not as it does now).

And for those seekers, my answer is that they are entitled to that pat on the shoulder for if they were not living their unique life as they are now in this moment and in this place, this universe (even though in which of the three aspects I cannot say) would not exist.  🙂

She has seen many things and the passage of time is so familiar as to have lost meaning to her.  She is old, she is glorious.  Every few years a branch breaks off but always there are more growing.  Perhaps one day age will win over growth and she will pass fully into the land of the dead, but until then she remains, Grandma Willow.

I have circled beneath her branches, made magic around her trunk, as have many before me, of varied traditions.  None of that mattered to Grandma. She welcomes all as she will.  Many have drank beneath her, have been raucous, have been silent, have done drugs and drunk and stayed sober.  Have fed animals from her branches, have dangled feet over the ledge of her massive arms.

The squirrels dart along her branches, the birds sing in her leaves, and all the while she rests, growing and dying, and breathing, always breathing as we move on, and she remains. 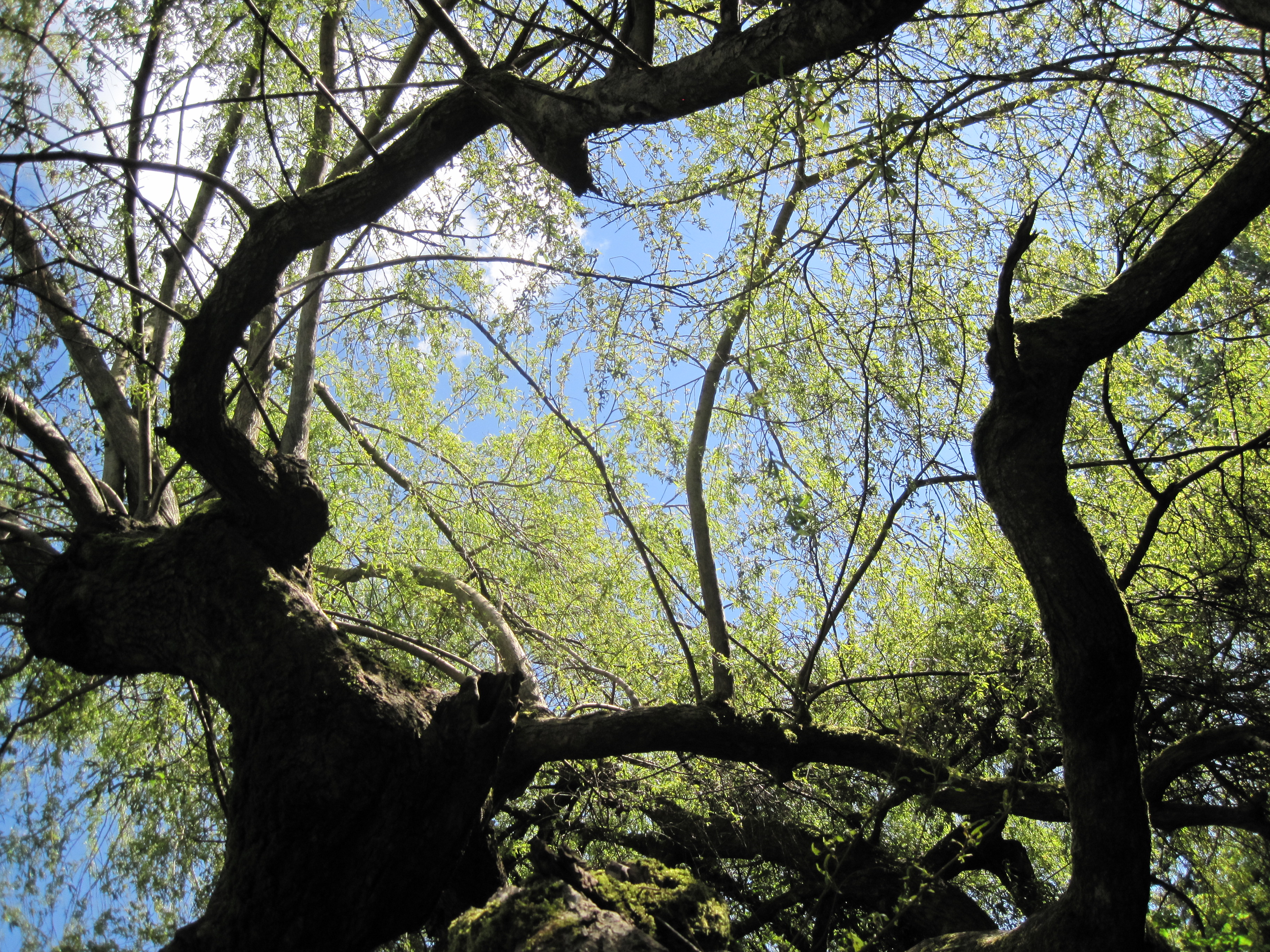