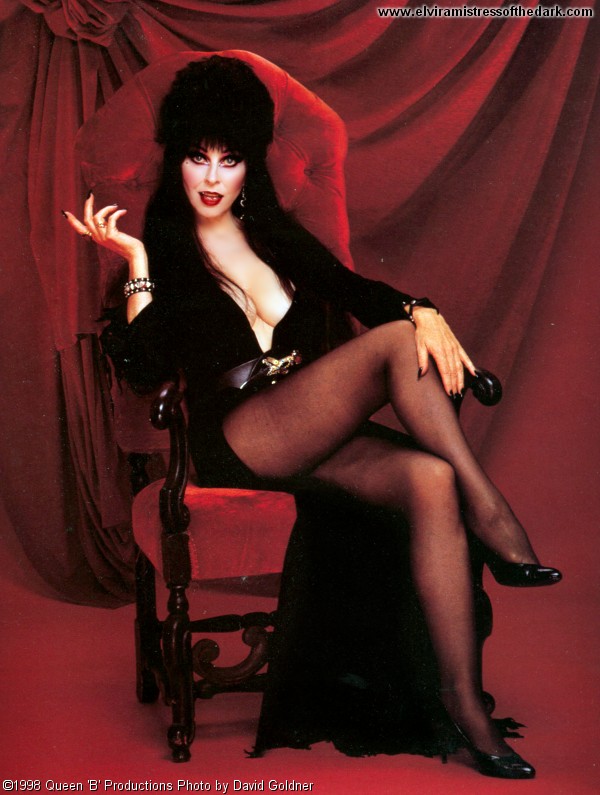 In 1988 the movie, Elvira: Mistress of the Dark came out.  If you haven’t seen it, you should.  It’s a fabulously fun, magical romp perfect for this time of year.

It was addictive for me back in its day.  I don’t know that I ever thought about why, but today I know it.  Re-watching it I felt what I had when I was younger.

She inspires me to personal empowerment.  (The timestamps below are but single examples easily pulled out, there are multiple examples of each of these throughout the movie.)

She’s fearless and generous (picking up the hitchhiker timestamp: 7:49, for example), protects herself (tosses said killer hitchhiker out of the car and tosses his axe after him timestamp 8:00).  Care for others balanced with looking out for her own needs.

She is embodied sexuality (no need to explain that one) and yet she doesn’t sell herself (timstamp 38:52 the real estate agent starts hitting on her-I appreciate her obvliousness- “Just because this house is up for grabs, doesn’t mean I am” to 39:20).

She has no problem saying no (17:15).  Even when dealing with assholes she often retains a sense of humour, rather than becoming embittered (18:00).

Despite her intense sexuality and forthrightness she listens to what the guy she’s attracted to wants in the moment, letting him redirect her advances to something he can deal with (he’s shy it seems) (55:16 to 56:46).

She gets angry, she gets even, she does the best she can while being far from perfect.

She does not apologize for who she is.

And that’s why she’s a hero of mine.  All of it, but particularly that lack of apology.  And her complete comfort in her sexuality.  Both things I aspire to.